What defines a Woman? How do we continue the debate generated around feminism by Brainquake and Boobquake?

I don't think that a sustained discussion of what defines a woman and what the character of feminism is today would have happened had both Boobquake and Brainquake not happened. The question is, how do we sustain this discussion once it's been generated in social media in the cracks and crevices created by two duelling quakes?

As Lina Srivasta writes, "social media in its present forms is limited in its ability to create a sustained, long-term effective movement." Social media is great for bringing together like minds across the globe, great for testing ideas, great for ephemeral debates, but if we want to sustain a focused educational discussion or an educational campaign on a global scale, what do we do? Where do we go next? That's where my thinking stalls today.

Perhaps as my colleagues Ed Webb and Lisa M Lane write, we'll be just fine without permanence, "let the data flow past, focus on the now, the experience, rather than seeking to hold on to anything."

Or maybe as my brilliant friend Liss Nup put it in her postmortem on Boobquake and Brainquake: "We came for the boobs, stayed for the smarts." And we'll keep the smarts coming!

Meanwhile the Brainquake team is still uploading photos and biographies of amazingly talented, creative, intelligent and dazzlingly capable women on the Brainquake Fan Page and on the Brainquake Tumblr site. Check it out and keep sending up your stories and uploading important news; keep sharing your comments and ideas and keep putting up your photos of women who made a difference in whatever way, large or small.
Posted by negar at 7:04 PM

Future of learning to be determined by students, panel says

Though they discussed a wide array of topics, the Future of Learning Panel centered its conversation on one theme articulated by session Chair Cathy Davidson: “How do we make the most of traditional institutions and unite worlds that are not always part of our institutions as traditionally conceived?”

The panel consisted of five professors from Duke University: 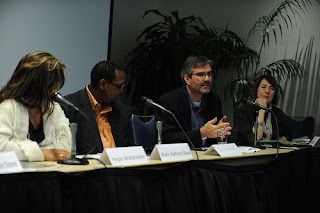 In addition to discussing the future, the panelists talked about some of their individual experiments with technology in the classroom. Mottahedeh spoke about her experiment with the Twitter Film Festival in her introduction to film studies class. Students posted video clips to a class blog and Tweeted about them with links to analysis. The effort attracted more than 300 followers from all walks of life.

Dubois is currently working on a project called the Haiti Lab that will link Haitian students with faculty through the Internet to continue education while the country is still in a state of disrepair.

“There’s a need for the university to be a space of rapid reaction,” he said. “Haiti needs an immediate plan and action.”

Davidson drew national press attention by writing a blog post titled “How to Crowdsource Grading,” which encouraged educators to use peer learning to evaluate students’ work and make it public. Now that the end of the semester is approaching, Davidson said her class did surprisingly well, producing a high caliber of work and motivated by the fact that it will be published.

O’Driscoll is teaching a class in which students put all deliverables into the creative commons and evaluate one another’s work. He said students held one another accountable for the material they produced, even asking to use his criteria to assign grades.

Neal has used his classes to take students’ knowledge into the Durham community through live webcasts, one of which drew 10,000 viewers. He also posts prompts to his exam questions publicly to employ generative learning.

Much of the panel’s spirited discussion was generated from audience questions, addressing issues like the use of Twitter during class, the ways technology affects student attention, and computer games as motivational learning.

“To allow students to be on their blackberries and computers is giving up a lot of power associated with being in ivory tower,” Anthony said.

Though some argue that electrons distract students rather than enhance their experiences in the classroom, Davidson pointed out that just because students stare at their instructors does not mean that they are paying attention.

Some of the panelists felt that the use of social media during class could actually enhance the student experience. O’Driscoll said he uses a class hash tag to monitor student interest and questions, as a replacement for the “note card technique” of collecting questions. There are even filter applications available to help determine the most relevant questions.

“Teaching does not exist in a pristine way,” Davidson said, noting that learning will continue to change as technology advances.

O’Driscoll said he hopes that more educators will follow the example of a game-based school called Quest to Learn that uses the “magic circle” method to enthrall students. He said teachers need to find “the magic between solid instructional design and the magic circle, and ground it deeply in good, solid pedagogy.”

Mottahedeh ended the discussion by noting that it isn’t the technology that will determine the future but the students.

“Students are the difference in the world, and we’ll figure out together how they will make that difference,” she said.

Thanks Rachel! Here's the original story 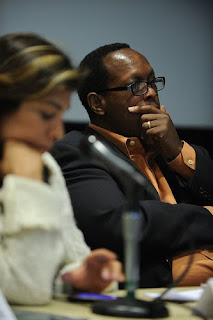 Yup...once again I tweeted through my entire panel!
Posted by negar at 5:22 AM