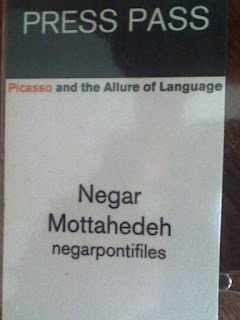 It's pretty incredible to think back and remind myself that I started The Negarponti Files only last semester, and that I started writing it with the intention of thinking through social media and frameworks for social action in the context of art, culture, politics, education and innovation.

The Negarponti Files received its very own press pass today to go to the preview of "The Picasso and the Allure of Language" at the Nasher Museum of Art. It was also the first time that the Nasher invited bloggers to come to their press previews, and that was all Wendy Livingston's doing.


She and I connected via Twitter when I posted a note on the upcoming Picasso exhibit at the Nasher, an exhibit I became aware of when a friend and professor at Duke put it on her Facebook feed. All this to say, that none of what happened today would have happened without our ability to collaborate and connect through social media networks, across disciplines and between institutions at Duke.

The Picasso exhibit is truly inspiring! It opens on August 20th,2009 at the Nasher. It has already showed at Yale where it was originally curated by Susan Greenberg Fisher.

Focusing on the writers that influenced Picasso and those he represented in his paintings, in particular, the exhibit itself blurs the lines between writing and painting and highlights collaborations that just happen to happen between artists because they are friends: Picasso's many heads of Balzacs (1957), his illustrated letter to Leo and Gertrude Stein (1906), his glowing illustrations of Pierre Reverdy's Le chant des morts (The Song of the Dead, 1948)

In her opening remarks, curator Fisher discussed a little piece, a collage, that represents the kernel of the exhibit:

The little collage by Picasso was created out of a calling card left by his long-time friends, Gertrude Stein and Alice B. Tokias, one day when Picasso wasn't home. Fisher asked us to notice the fold on the top right corner of the card, a fold which people apparently left on the card if the person they were calling on wasn't home. The collage includes a pack of cigarettes, a reminder of Alice B. Tokias smoking habit. 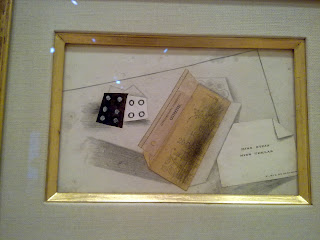 I don't know what it was, but more than the flow of images and words, it was Picasso's poetry that stuck with me on a Wednesday morning. This one in particular delighted me: 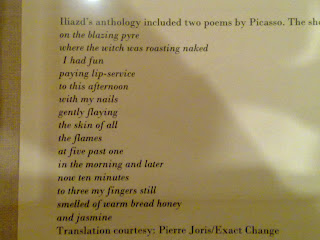 If you can get to Nasher, I encourage you to also visit the "Africa and Picasso" exhibit which showcases some of the Nasher's holdings of masks and figures from colonized territories in West Africa. I made a little video in that room and it is below. Be forewarned: my reading of this text (captured below with my phone camera) and my filming of the objects in the exhibit is awful. 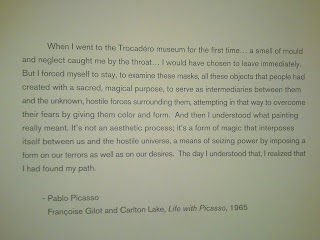 But if it is awful, you should know that I'm just learning to love my new camera phone.