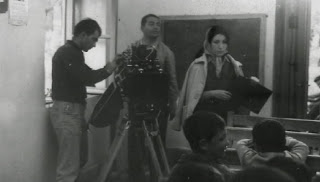 I've had a chance to think through how the Boobquake and Brainquake campaigns went down in social media and in traditional media and wanted to take this opportunity share some of my thoughts with all of you.

I think it is clear that the Brainquake campaign on Facebook and #Brainquake on Twitter was a response to the Boobquake campaign which was started by Jen McCreight. In other words, in my thinking anyway, there have been plenty of pronouncements of "the Sedighi variety" on women and women's bodies to which we could have responded with any number of campaigns, but we haven't and we didn't.

Brainquake was a direct response to Boobquake and an effort to celebrate the lives and achievements of women in Iran and elsewhere. In my thinking, again, and I cannot speak on behalf of Golbarg, there is a lethal cultural context which harbors a blatant orientalism (a notion of backwardness vs. progress) in which Boobquake was born. Combine this with misunderstandings of the Iranian women's movement and Iranian feminism & its historical, social, political and cultural contexts and mix in boobs and what you have is --wow-- explosive.

Now take this batter to social media venues such as Twitter, Youtube and Facebook where anyone can say anything, anything goes, and what you have is a total dissolution of a campaign with potential.

This was the subject of a very lively discussion on Twitter between myself and a group of social movement/social media strategists last night. Lina Srivastava summarizes our discussion really well in her blog on Strategies for Social Change. We all benefited from seeing how both Boobquake and Brainquake played out and devolved to the lowest common denominator on April 26, 2010: Boobs and frivolity on one end, and violent explosive anger on the other. Kendall Thiessen really said it best: "Once you introduce boobs, you KNOW the kind of response you are going to get. Clearly the message was lost."

I want to point out the little known fact that Jen McCreight and I have been in close contact throughout both campaigns and that I have been in support of the #boobquake hashtag on Twitter and in support of Jen herself personally. I told her, though, flat out, that I was dong Brainquake. This, because it was very clear, early on, that what she had conceived and what happened were going to turn out to be two different things.

Hers was a scientific experiment and a 3rd wave feminist response to a cleric's suppositions. She's an atheist, a soon-to-be-PhD-student, and a skeptic and she wanted to test out Sedighi's claims regarding the correlation of quakes and women's immodesty. Her curiosity is precious and I cannot look askance at that as a university professor myself. In addition, anyone who was on social media in the last week, knows that while the #boobquake hashtag brought attention to the situation in Iran and the post election crisis (and I saw this as an excellent development from where I stood), it also brought with it the hordes of heterosexual men egging women on for a cleavage show on Monday. Add to that, the commodification of breasts, cleavage & women's skin in the global context of the media, and the campaign, sure enough, became a piece ripe for porn magazines. Playboy of course picked it up.

All this put a great deal of stress on the direction of the Boobquake movement and lay the burden on those who understood what Jen was up to... well to explain it, defend it, and sometimes fight against the very things it was promoting, for example the exposure of women's bodies, in the context of commodification and commercialization. And a healthy scientifically minded skepticism aimed and religious fervor and superstition, in the context of a racist and orientalist culture that either willfully misunderstands and misrepresents or unknowlingly conceives of everything Middle Eastern as backward.

Also, while Jen was taking orders for Boobquake t-shirts that would make money for earthquake rescue charities, capitalism and commodity culture dictated that a tongue-in-cheek social movement become a money making scheme for a sex - hyped-downturned economy, to the extent that just today, the University Store at Purdue where Jen studies, started selling "Boobquake t-shirts" without Jen's permission.

All this to say that while I understood Jen's mission and stood by her as a woman, a student, a skeptic and a scientist, I also could see that the combination of Orientalism (notions of backwardness vs progress) + misunderstandings of the Iranian women's movement / feminism & its cultural social and political contexts + boobs was doomed to a total failure.

Why not have a Brainquake then and quake some brains to freedom? And why not celebrate the lives and achievements of women? Why not celebrate individual lives instead of meat? These were my thoughts as I watched a science experiment devolve into frivolity, commercialism, and the commodification of women's bodies in social media and traditional media

My efforts and Golbarg's, as I see it, was to enable the stories of women to be heard. And if you look at the Brianquake Twitter feed and the Brainquake Tumblr site or even the photos put up on the Facebook Brainquake page you'll see this celebration in action in the midst of a battle ground that is determined to turn Golbarg, Jen and myself into rabid cats. We didn't succumb to this. Neither did we misunderstand or misrepresent the other's intentions knowingly. A critique of the direction of the campaigns themselves were taking, one as a response to the other, one major and one minor, was inevitable.

I hope this helps and inspires others to do better and achieve greater things on behalf of all of us. We all stand on the shoulders of giants and I am humbled by all the things I have seen and heard from each of the participants in the Brainquake campaign. I leave you with this quote from Dawn.com by Rafia Zakaria

"In socio-cultural paradigms where women’s bodies symbolise familial and national honour, as in Iran or Pakistan, their covering is seen as corresponding directly to the piety and righteousness of society. Consequently, there is a brutal and obstinate disregard for women’s autonomy and their status as human beings equal to men.

Conversely, in western societies, a similarly reductionist calculus construes the exhibition of the female body as a sign of liberation, with an equally stubborn blindness to how such sexualisation debases women. Both versions are replete with untruths perpetuated by men. And just as a woman in a burka is complicit in the lie that the female form is the source of discord, so is the woman who displays her body complicit in demeaning it to a mere sexual object"
Posted by negar at 3:24 PM